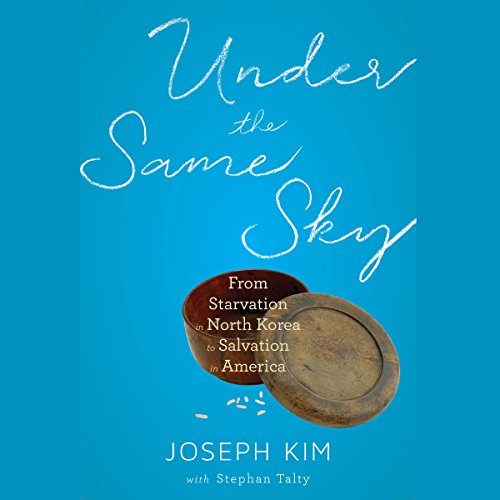 Under the Same Sky: From Starvation in North Korea to Salvation in America

A searing story of starvation and survival in North Korea, followed by a dramatic escape, rescue by activists and Christian missionaries, and success in the United States thanks to newfound faith and courage.

Inside the hidden and mysterious world of North Korea, Joseph Kim lived a young boy's normal life until he was five. Then disaster struck: the first wave of the Great Famine, a long, terrible ordeal that killed millions, including his father, and sent others, like his mother and only sister, on desperate escape routes into China.

Alone on the streets, Joseph learned to beg and steal. He had nothing but a street-hardened survival instinct. Finally, in desperation, he, too, crossed a frozen river to escape to China. There a kindly Christian woman took him in, kept him hidden from the authorities, and gave him hope. Soon, through an underground network of activists, he was spirited to the American consulate and became one of just a handful of North Koreans to be brought to the US as refugees.

Joseph knew no English and had never been a good student. Yet the kindness of his foster family changed his life. He turned a new leaf, became a dedicated student, mastered English, and made it to college, where he is now thriving thanks to his faith and inner strength.

Under the Same Sky is an unforgettable story of suffering and redemption.

Tim Taylor
5つ星のうち5.0 Read under caution, it will shock you
2016年12月9日に英国でレビュー済み
Amazonで購入
This book is one of the most horrific stories I have read, it is absolutely horrible to think a country is being run by a complete despot, that people can believe in someone to the extent they will relinquish their identity to become part of a giant machine that basically doesn't really care if they live or die.