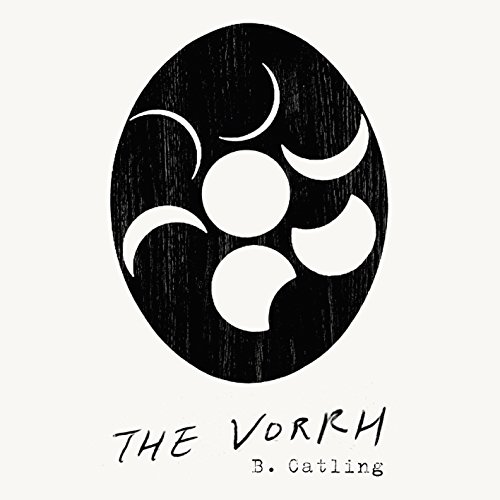 Prepare to lose yourself in the heady, mythical expanse of The Vorrh.

In B. Catling's twisting, poetic narrative, Bakelite robots lie broken - their hard shells cracked by human desire - and an inquisitive Cyclops waits for his keeper and guardian, growing in all directions.

Beyond the colonial city of Essenwald lies The Vorrh, the forest which sucks souls and wipes minds. There, a writer heads out on a giddy mission to experience otherness, fallen angels observe humanity from afar, and two hunters - one carrying a bow carved from his lover, the other a charmed Lee-Enfield rifle - fight to the end.

Thousands of miles away, famed photographer Eadweard Muybridge attempts to capture the ultimate truth, as rifle heiress Sarah Winchester erects a house to protect her from the spirits of her gun's victims.

In the tradition of China Miéville, Michael Moorcock and Alasdair Gray, B. Catling's The Vorrh is literary dark fantasy which wilfully ignores boundaries, crossing over into surrealism, magic-realism, horror and steampunk.

If you like China Mieville, Victorian Gothic and/or acid, you'll love it. However, do yourself a favour - when you get 90-95% of the way through, stop reading and dream the rest yourself, promising to finish it one day and never quite managing. The ending is deeply, deeply unsatisfactory, with multiple sub-plots just tailing off into thin air or irrelevance. It's either a case of amazingly poor editing or a slightly tawdry exercise in selling sequels that jars discordantly against what's otherwise a truly tremendous novel. Maybe it's intended to be a reflection of the Vorrh itself, deflecting and dissembling until the end, but the cynic in me suggests otherwise. It's a real shame, as wrapped up effectively this book would be a once-in-a-generation event; as it it, it ends on a slightly sour note that spoils the experience.

Brooke Fieldhouse
5つ星のうち4.0 You are transcended above the printed page.
2022年5月2日に英国でレビュー済み
Amazonで購入
Englishman Peter Williams served as an armourer in the Great War. Seeking motivation after that massive struggle, and awed by the power and magic of THE VORRH, a forest in one of Germany’s few African colonies, he sets out to explore. It’s a forest which - says Williams, “…can not only think, it can memorize and steal the memories of others.” But Williams isn’t just Williams, he’s ONEOFTHEWILLIAMS an ego of extra-human powers and armed with ESTE a sentient shooting bow. There he stalks – and is stalked by TSUNGALI an African hunter, and menaced by SIDRUS.
GHERTRUDE TULP lives in nearby ESSENWALD, a town built almost as a facsimile of a town in Germany. She lives in a large house, in isolation but for her manservant MUTTER and a cyclops boy called ISHMAEL who lives sealed off in the basement, a virtual prisoner and brought up by a group of robots known as THE KIN.
DR HOFFMAN also lives in Essenwald, and nearby lives red-headed McLish, keeper of the LIMBOIA (evidently means literally the ‘Lost’) and apparently motiveless were it not for their leader THE HERALD who drives them as a native workforce cutting down and transporting trees. The Limboia seem to have the ability to raise the dead with ritual involving heavy breathing and mirrors. McLish and Hoffman it seems are up to no good.
EADWEARD MUYBRIDGE (yes, that one!) has a connection to the Limboia in that they use mirrors to induce resurrection. But their technique is mystical, whereas Muybridge’s is photo- scientific. There’s lots of whirring, clicking, and humans going into super-human spasms.
So, you get the point. The novel THE VORRH – named after the forest – by B CATLING, is well weird. And yes, Muybridge the famous photographer died in 1904, so what’s he doing cropping up somewhere between 1918 and 39? It’s alternative history, and the whole thing is weird and wonderful. The writing style is unique. Catling manages to endow physical objects with sentience, and states of mind with physical characteristics. “His face shook as if it had been hit with a frozen gravedigger’s spade.” “McLish under the bed, his voice humming strangely in the resonance of the china chamber pot.” “It was as if the air itself had been chopped and a segment removed from the room.” “The iron hooves of the tin clock stampeded into his dense and sweated dream.”
When you read something unlike anything you’ve read before, it’s impossible to resist grasping for the nearest thing you have read. Not wishing to endow the book with a comparison it might not be worthy of - or it worthy of the book, I dare to suggest valid comparison with Peake’s Gormenghast, Conrad’s Heart of Darkness, Thomas Mann’s The Magic Mountain, Mary Shelley’s Frankenstein, Burgess’ A Clockwork Orange, the works of the Brothers Grimm, the poems of Arthur Rimbaud, Susanna Clarke’s Jonathan Strange & Mr Norrell, and The Bible, though I must confess that I have not read every word of the Bible. If the medium were painting, it’s rather like exploring the surreal land/mindscapes of Max Ernst or the nightmarish faces of James Ensor.
If you are a slave to ‘the narrative arc’, this is not the book for you. If you are a stickler for static character points of view, or even the ‘free independent style’ this is not the book for you. If you are the sort of person who goes on cosy creative writing courses held in rustic cottages in France, this is not the book for you. If you don’t like lengthy diversions from the narrative path, then this is not the book for you. But consider, if there were no diversions in fiction, there would be no Proust, no Dickens, and Lawrence Sterne’s Tristram Shandy would have been removed from all libraries. Catling somehow manages to turn ‘overwriting’ into a fine art. His character points of view ricochet all over the place, but the result is splendid. When I read, I want an experience in which I am transcended above the printed page into a world full of rich sounds, rhythms, and images. This is it!
My only criticism – and I’ve yet to be proved wrong because The Vorrh is only the first book of a trilogy, book number 2 is The Erstwhile, and 3 is Cloven - is that I can’t find any underlying philosophy. What I mean exactly by that is that when – for instance you read a novel by say - Ursula le Guinn you enter a world of fantasy, but it’s a world which is still recognizable, has clear rules, it’s easy to spot the baddies and goodies. I haven’t yet experienced that with B Catling, and somehow, everything seems to be seen from the outside rather than within; surface, rather than depth, the characters – creatures or entities seem more like computer game avatars. But as I say, there’s two books still to go!
続きを読む
1人のお客様がこれが役に立ったと考えています
違反を報告する
レビュー を日本語に翻訳する

Tade Thompson
5つ星のうち5.0 Just Read It
2013年6月28日に英国でレビュー済み
Amazonで購入
I'm not going to say this is the best book I've read in a long time, even though it is. You'd have to know what other books I've read to make sense of such a statement. I will say this: 'The Vorrh' is sublime. It is evocative, the language is beautiful with inventive phrasing and whole paragraphs that just sing at you. It does not hold back. The violence is violent, the sex is sexual and the magic is truly mystical. Nothing here feels like it has been done before. Some of the events are so original that you will gasp. I have to say when I finished reading it my first thought was 'where has this writer been hiding?'
This is a book I will read again and again. I will think about it in quiet hours. I will wonder.
I mean, what the hell do you make of passages like this:
"It was said that he was hunting stillness, and that instead of picks or shovels, guns or maps, he carried an empty box on his back, a box with a single eye which ate time."
In the last quarter of the book I thought the dialogue suffered from an excess of exclamation points, but this is a quibble.
Just read it. You won't be sorry.
続きを読む
9人のお客様がこれが役に立ったと考えています
違反を報告する
レビュー を日本語に翻訳する

XX
5つ星のうち4.0 Despite...
2022年1月7日に英国でレビュー済み
Amazonで購入
Despite it's brio and early inventiveness, I wanted an editor to challenge some of the writing/concepts – it could have been a great book at half the size. The approach to queerness appeared 19th century (Joris-Karl Huysmans' 'Against Nature'); even fantasy can say a lot about us. Ursula K. Le Guin's 'The Left Hand Of Darkness' still feels like the contemporary benchmark.
続きを読む
違反を報告する
レビュー を日本語に翻訳する

N.C.Harrison
5つ星のうち3.0 Complicated
2018年11月30日に英国でレビュー済み
Amazonで購入
I read this book because the author had die recently and the press coverage talked about the impact of the book. Was not particularly impressed. I know it is the first part of three books, but it does not make me want to read the other two. maybe because it was part one that it had may story lines but they did not seem connected so it seemed like different stories put together. I'm glad I read it because I would have felt I was missing out if I had not. Now I can just get on with my life.
続きを読む
2人のお客様がこれが役に立ったと考えています
違反を報告する
レビュー を日本語に翻訳する
すべてのレビューを参照します