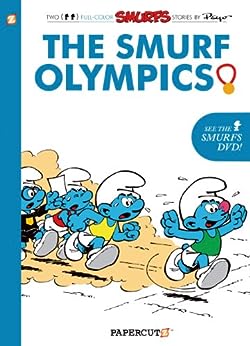 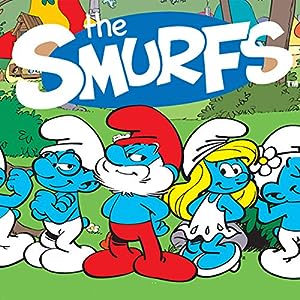 Peyo created The Smurfs in his comic strip "Johan and Peewit". Peyo wrote and drew over 8 extremely popular titles in Europe throughout his storied career. In 2008 the country of Belgium celebrated what would have been his 80th birthday by issuing a 5 Euro coin featuring his creation, The Smurfs.

Mrs. Patricia M. Clow
5つ星のうち5.0 Grandaughter loved it
2013年2月15日に英国でレビュー済み
Amazonで購入
this is something our own children enjoyed so great to introduce it to our grandaughter too. She loves it and is now collecting figures etc. Lucky we hung on to some of the originals!
続きを読む
1人のお客様がこれが役に立ったと考えています
違反を報告
レビュー を日本語に翻訳する

Vic George 2K6
5つ星のうち4.0 Great story, even if the ending was bad.
2012年4月3日にアメリカ合衆国でレビュー済み
Amazonで購入
"The Smurf Olympics", which was originally published in French, is a funny Smurf story that finally got translated into English. And, except for Grouchy's "me, I don't likes" which don't fit the spirit of the character as he is normally interpreted in English, it's a good translation. The story itself is the basis for both "The Smurfic Games" cartoon special and the cartoon show episode "A Little Smurf Confidence", as it features the Smurfs splitting off into three teams, and one Smurf who becomes a team all by his lonesome finds himself to be lacking the confidence needed to win the tournament, until Papa Smurf gives him a special cream to put on his nose that he claims would give him special strength. Throughout the whole story, Brainy is pestering his fellow Smurfs as the referee, who gives them yellow cards whenever they violate some sort of rule. Anyway, the lone Smurf with the cream on his nose goes through all the contests in the tournament and comes out a winner in almost all of them until the last, when he gets so exhausted that he nearly drops out, until a nettle prick in the booty gets him rocketing right to the finish line. He gets the medal, which he at first refuses until Papa Smurf reveals that the cream on his nose was actually gooseberry jam, and he almost gets a kiss from Smurfette...until Brainy shows up with a pink card for Smurfette. At that point, I would have wanted to be that Smurf and throw Brainy out of the village on his head!

In addition to the main story, there's also a series of one-page sketches called "More Smurf Olympics", which was originally featured in the Random House Smurf comic book The Smurfic Games with some ones originally only published in other languages added. Overall, I think this is a good story to purchase. If you're a Smurf fan, you will enjoy it.
続きを読む
2人のお客様がこれが役に立ったと考えています
違反を報告
レビュー を日本語に翻訳する