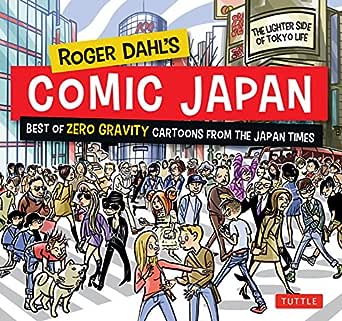 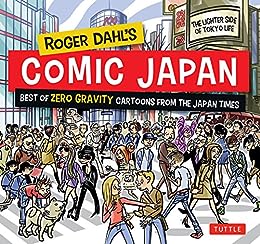 "This book is a collection of some of his best strips from the Zero Gravity comic. If you are, have been or are interested in becoming an expat (especially one in Japan), this book will interest you. Actually, you will like this book if you're interested in life in Japan at all… even if you never even visited here." —Tokyo Five blog

"Dahl has a knack for cleverly pointing out the bizarreness of everyday life in Japan while still maintaining affection for the country and its people. A delightful and funny collection." —Walter Mondale, former US Ambassador to Japan

"Dahl's cartoon has an intriguing power to turn your mundane, awkward, even frustrating everyday experiences in Japan into light-hearted cultural adventures. In this collection, the bits and pieces of his weekly strips come together in synthesis as a story." —Miki Tanikawa, Journalist New York Times and International Herald Tribune

"Most non-Japanese who have spent time in Japan will recognize both Japan and themselves in Roger Dahl's fine cartoons. He is an equal-opportunity satirist, skewering foreigners and host country alike. My own favorites include "The Darkest Hour" (about the intricacies of trash disposal, p. 13), "Polite Country" (the panel ends with the foreigner sighing, "I need a vacation in a rude country," p. 131), and a Swiss army knife adapted for Japan, complete with abacus, chopsticks, and karaoke mike (p. 142)." —Dr. Richard Minear, author of Dr. Seuss Goes To War and professor emeritus at University of Massachusetts

"The drawing is lively and expressive,[…] This is a book of smiles, not guffaws, yet the accumulation of strips builds a picture of an expat lifestyle, with its attendant loneliness, confusion, and thrills." —Publishers Weekly

"Roger Dahl's genius is evident from the fact that his cartoons, rather than laughing *at* the Japanese, let readers laugh *with* the Japanese. And he manages to be both funny and incisive without engaging in stereotypes or bowing to the demands of political correctness." —Mark Schreiber, Tokyo-based scribe and raconteur

"Through the structure and tone of his comics, Roger Dahl manages to convey humorous, sometimes bizarre, but gently affectionate encounters with the people and customs of Japan. His work has been called 'genius', 'minimalistic', 'insightful', 'funny and incisive', and maintains a bemused, yet softly satirical mood throughout." —HubPages.com

"Roger Dahl's Zero Gravity: The Lighter Side of Tokyo Life takes you to the crowded train platforms of Shinjuku, the tatami-mat homes, izakaya bars and offices where Japanese and gaijin haplessly interact. He showcases all of this with fluid, graceful lines and warm, insightful humor. Roger's cartoons are a wonderful introduction to Japan for anyone with a funny bone." —Gwen Muranaka, Cartoonist, "Noodles," Japan Times (1996-2013), English editor-in-chief, The Rafu Shimpo (Los Angeles Japanese Daily News) --このテキストは、paperback版に関連付けられています。

Roger Dahl has a degree in art from the University of Puget Sound and a degree in Rehabilitation Medicine from the University of Washington. He lived for many years in Tokyo, where he was an English teacher at an elite private academy for boys. During his last four years of teaching, he began cartooning for The Japan Times, which has published around 4,000 of his cartoons since 1991. He also illustrated the children's book Wisha Wozzariter (Penguin, 2012), which won the prestigious Crossword Book Awards in India for Best Children's Book of 2013. He now lives in Seattle. --このテキストは、paperback版に関連付けられています。

J. Warfle
5つ星のうち5.0 What a Great Book!
2015年3月16日にアメリカ合衆国でレビュー済み
Amazonで購入
I really enjoyed this book. The comics are very funny and you learn a lot about Japanese culture at the same time. My only complaint is that I don't see a sequel scheduled yet. I highly recommend this!
続きを読む
1人のお客様がこれが役に立ったと考えています
違反を報告
レビュー を日本語に翻訳する

YLB
5つ星のうち5.0 Accurate and fun capture of Japanese Culture
2015年6月23日にアメリカ合衆国でレビュー済み
Amazonで購入
Having lived in Japan for a couple years, this book is just delightful. Dahl captures the the gaijin experience and Japanese culture perfectly. This book would make a wonderful gift for anyone who has spent an extended time in Japan.
続きを読む
2人のお客様がこれが役に立ったと考えています
違反を報告
レビュー を日本語に翻訳する