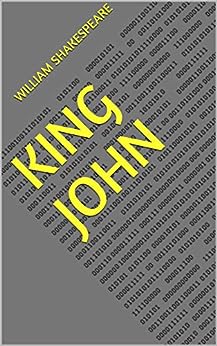 
"Advanced students and scholars working with King John and its text will find the edition invaluable."--Choice
--このテキストは、kindle_edition版に関連付けられています。

William Shakespeare, also known as "Bard of Avon," is regarded as one of the greatest writer in the English language and the finest dramatist of the world. He was a successful English poet, Playwright, and actor. He is often called England's National Poet. His works have been translated into every major language of the world, and are performed the most as compared to any other playwright. His works, along with some collaborations, consist of about 38 plays, 154 sonnets, two long narrative poems, and few other verses, of which the authorship of some is unconfirmed. Shakespeare's private life is much speculated about, as too few records of his private life have survived. The known works of Shakespeare were produced between 1589 and 1613. In the early phase as a playwright, Shakespeare mostly produced comedies and histories, and these works are considered as one of the best in these genres. Afterwards, he wrote tragedies until about 1608, which include Hamlet, Macbeth, King Lear, and Othello. These works are also one of the finest in English language, and literature. In his last phase, he wrote tragicomedies, also known as romances, and collaborated with other playwrights. --このテキストは、kindle_edition版に関連付けられています。

Ike
5つ星のうち5.0 Great read and very underrated
2013年5月24日に英国でレビュー済み
Amazonで購入
King John is now the first of the Shakespeare histories that I've read and it was a great way to start. On with Edward III
続きを読む
違反を報告
レビュー を日本語に翻訳する

Aran Joseph Canes
5つ星のうち4.0 Where Game of Thrones Received its Inspiration
2019年11月13日にアメリカ合衆国でレビュー済み
Amazonで購入
King John is Shakespeare’s version of medieval realpolitik. Everyone, from king to queen to cardinal, is corrupt and interested more in power and conquest than in any more noble aim.

It makes for entertaining reading if you are partial to this kind of narrative. Orwell, for example, thought he saw the predecessors of the twentieth century politicians he depicted in Animal Farm.

Personally, I prefer Shakespeare’s works with more memorable wordplay and pathos. But King John should enjoy a renaissance in the wake of popular successes like Game of Thrones. Dragons aside, the imagined worlds of Martin and Shakespeare bear a close resemblance. Recommended to those who cannot get enough of Shakespeare’s histories.