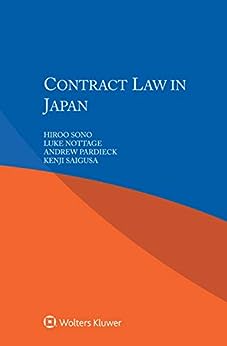 Hiroo Sono (LLB/LLM Hokkaido, LLM Michigan) is Professor of Law at Hokkaido University, Japan. His main fields of research interest are in contract law and international commercial law. He is one of the founding members of the CISG Advisory Council (CISG-AC) since 2001 and the Global Private Law Forum (GPLF) of Japan since 2014. From 2006 to 2008, he served as Counsellor, Civil Affairs Bureau, Ministry of Justice where he was responsible for Japan's accession to the CISG. Since 2008 he serves as the Japanese delegate to UNCITRAL Working Group VI (Security Interests) and since 2015 he is a correspondent to UNIDROIT.

Luke Nottage (BCA/LLB/PhD VUW, LLM Kyoto) specialises in contract law, consumer product safety law, foreign investment regulation and international arbitration. He is Professor of Comparative and Transnational Business Law at Sydney Law School, founding Co-Director of the Australian Network for Japanese Law (ANJeL) and Associate Director of the Centre for Asian and Pacific Law at the University of Sydney (CAPLUS).

He has or had executive roles in the Australia-Japan Society (NSW), the Law Council of Australia's International Law Section, the Australian Centre for International Commercial Arbitration, and the Asia-Pacific Forum for International Arbitration. Luke is also a Rules committee member of ACICA and listed on the Panel of Arbitrators for the AIAC (formerly KLRCA), BAC, JCAA, KCAB, NZIAC, SCIA and TAI. Luke has consulted for law firms worldwide, the EC, the OECD, the UNDP, ASEAN and the Japanese government, and has made numerous public Submissions to the Australian government on arbitration and consumer law reform. He qualified as a lawyer in New Zealand in 1994 and in New South Wales in 2001.