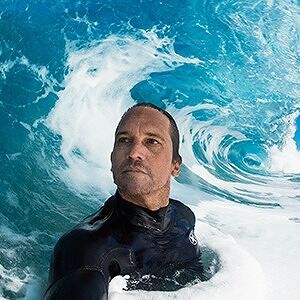 Instagram sensation Clark Little shares his most remarkable photographs from inside the breaking wave, with a foreword by world surfing champion Kelly Slater.

“One of the world’s most amazing water photographers . . . Now we get to experience up-close these moments of bliss.”—Jack Johnson, musician and environmentalist

Surfer and photographer Clark Little creates deceptively peaceful pictures of waves by placing himself under the deadly lip as it is about to hit the sand. "Clark's view" is a rare and dangerous perspective of waves from the inside out. Thanks to his uncanny ability to get the perfect shot--and live to share it--Little has garnered a devout audience, been the subject of award-winning documentaries, and become one of the world's most recognizable wave photographers.

Clark Little: The Art of Waves compiles over 150 of his images, including crystalline breaking waves, the diverse marine life of Hawaii, and mind-blowing aerial photography. This collection features his most beloved pictures, as well as work that has never been published in book form, with Little's stories and insights throughout. Journalist Jamie Brisick contributes essays on how Clark gets the shot, how waves are created, swimming with sharks, and more.

With a foreword by eleven-time world surfing champion Kelly Slater and an afterword by the author on his photographic practice and technique, Clark Little: The Art of Waves offers a rare view of the wave for us to enjoy from the safety of land.
続きを読む
Previous page
Next page

“Stunning images from inside the barrels of some of the most powerful and dangerous waves on Earth. . . . The Art of Waves chronicles [Clark’s] adventures in the ocean.”—Caleb Jones, AP

“There’s an undeniable allure to surfer and photographer Clark Little’s aquatic photography, and it’s one that teeters on the edge of dangerous attraction and childlike excitement.”—Kristy Alpert, HILuxury Magazine

“Clark Little is in love with the sea. The images in the book are from the dreams of every surfer on the planet.”—Adventure Journal

“For years Clark would voluntarily put his life on the line riding his surfboard at the Waimea Bay shorebreak to experience brief moments of bliss. He was training to become one of the world's most amazing water photographers. Luckily for the rest of us, Clark survived all that for someone to put a camera in his hand. And now we get to experience up-close these moments of bliss.”—Jack Johnson, musician and environmentalist

“One of the most visible and respected water photographers in the world . . . Clark Little has taken the closeout shorebreak by his home and turned it into high art seen around the world.”—Keith Hamm, ESPN

“I have been in the ocean my whole life, and to witness her beauty through Clark’s eyes and images always impacts me. His unique perspective and the intimacy he creates allows me to see waves in a new and different way.”—Laird Hamilton, big-wave surfer and author of Force of Nature

“In Clark Little’s spectacular shorebreak photography, he takes you directly inside a wave so you can witness firsthand its power and its beauty.”—Dan Havlik, Digital Photo Pro

“There are special moments in nature when the culmination of a wave's energy breaks free into fantastical forms. Clark’s exceptional skill is meeting the apex of this energy and capturing it to share these final and most magnificent of manifestations.”—Mike Stewart, bodyboarding world champion

Introduction: For the Love of Shorebreak

Clark Little never set out to become the world’s best wave photographer, but in hindsight it seems as if he’s spent his entire life training to be exactly that. He’s been a devout surfer since the age of six, on the North Shore of O‘ahu, where the waves are big and powerful, and the light and water color are majestic. Clark and his older brother, Brock, were thrill-seekers. While Brock heaved himself over the ledges of thirty-foot beasts on the outside at Waimea Bay, Clark preferred the Waimea shorebreak, where swells bounced and torqued and tripled up before exploding on shallow, neckbreaking sand. His amygdala registered no fear, and his pain threshold was like an MMA fighter’s. Clark is designed to be in dangerous water.

In 2007, Clark’s wife, Sandy, bought a photo of a wave, shot from the shore, to hang on their bedroom wall.

Clark saw it and chuckled. “Honey, what are you doing buying a picture of a wave?” he said. “I’ve surfed the shorebreak all my life. I’m going to go out and get one from inside the barrel.”

With a cheap point-and-shoot camera encased in a water housing purchased on Amazon, he threw himself into the Waimea shorebreak, the same wave he grew up surfing, not far from their family home. After a series of requisite beatings, he nailed some shots.

The results were spectacular. The fast shutter speed froze what in real time happens way too quickly for the naked eye to study. The way the wave sucked up the sand. The way the heaving lip resembled blown glass, with reflections of trees and the shoreline.

Because a barreling wave is so powerful and fickle, the tube is an almost sacred space that most surfers see rarely, if ever. Clark had spent his entire surf life getting into the tube—and out of it— without breaking his neck. His lifelong relationship with it was palpable, and the shots he took that day had a sort of ultrasound-like intimacy. For years he had tried using words, with limited success, to explain what he saw and experienced. These photos were his first chance to truly share with others the incredible world he was witnessing inside the shorebreak waves.

Clark knew tubing waves, but he also knew something else subconsciously: composition. His father, Jim, taught photography and art at Punahou School and University of Hawai‘i Leeward for thirty years. While Clark spent his formative years frolicking in giant surf, he also hung out with his dad in the darkroom on the weekends, and he grew up with photos lying around the house. The Golden Ratio, the well-balanced frame, the nuances of light and color—Clark was exposed to all the principles of good photographic composition. Without thinking, he absorbed this knowledge and applied it years later to frame the shot in a split second, deep inside the tube.

Sandy loved the new wave photos on her walls, and Clark loved hurling himself into thick, tubing shorebreak with a camera. He shared his images with family and friends—they were rapt. He upgraded his camera gear and started to pass his work around. His breakthrough came when he was asked to submit twenty photos to a prominent UK news agency. On a single day in February 2009, several major UK newspapers featured both Clark’s images and stories about him. He woke the next morning to more than seven hundred gushing emails, including requests to appear on Good Morning America, The Today Show, Inside Edition, and others. Within one year, Clark resigned from his supervisory position at the Wahiawā Botanical Garden and devoted himself fulltime to photography.

Since then, Clark’s rare combination of skills has sharpened and strengthened. He’s gotten even wiser to the whims of the sea and almost Bruce Lee-like in his dances with slamming waves. He has a sense of zen calm in even the heaviest situations. Instead of worrying about getting pummeled, he focuses completely on capturing the decisive moment. And he’s expanded beyond the shorebreak, training his lens on the myriad sea life that abounds beneath the surface, and the unique shapes, colors, and perspectives caught from high above it.

This book is a survey of his remarkable body of work. Some of these images have enjoyed long and storied lives; many others have never been published before. Interspersed with essays, interviews, and quotes, the following pages will give you a greater understanding of both Clark Little and that special space inside a breaking wave.

Award-winning photographer Clark Little grew up on the North Shore of O‘ahu, where he made his name as a pioneer of surfing at the lethal Waimea Bay shorebreak. His images of waves have been shared around the world, from the walls of the Smithsonian to the pages of National Geographic. Clark and his work have been featured in Nikon television commercials along with appearances on CBS Evening News with Norah O’Donnell, Good Morning America, Today, and the Discovery Channel. He lives on O‘ahu and can be found at the beach under a detonating wave most days of the week.

A lifelong connoisseur of waves and a former professional surfer, Jamie Brisick has authored books including Becoming Westerly: Surf Champion Peter Drouyn’s Transformation into Westerly Windina, We Approach Our Martinis with Such High Expectations, and Have Board, Will Travel: The Definitive History of Surf, Skate, and Snow. He was awarded a Fulbright Fellowship and his writings have appeared in The New Yorker, The Surfer’s Journal, and The New York Times. He lives in Los Angeles.
続きを読む
Kindle化リクエスト
このタイトルのKindle化をご希望の場合、こちらをクリックしてください。

Russell Tompkins
5つ星のうち5.0 Out of this world book
2022年4月11日に英国でレビュー済み
Amazonで購入
This book is an amazing read and the pictures are absolutely amazing. I would recommend this book to anyone who likes the sea, animals, sunsets, scenery and amazing photos. Quality is amazing and well worth the money
続きを読む
違反を報告する
レビュー を日本語に翻訳する

Jackie Bogglen
5つ星のうち5.0 Beautiful book
2022年4月28日に英国でレビュー済み
Amazonで購入
This book has the most amazing photos. Anyone who loves the sea , and power waves create . Will love the stunning clever photography of Clarke Little.
続きを読む
違反を報告する
レビュー を日本語に翻訳する

Amazon Customer
5つ星のうち5.0 Stunning book
2022年4月25日に英国でレビュー済み
Amazonで購入
This book is a beautiful insight to Clark’s passion of photography and the love of the ocean, the book is stunning from cover to cover
続きを読む
違反を報告する
レビュー を日本語に翻訳する