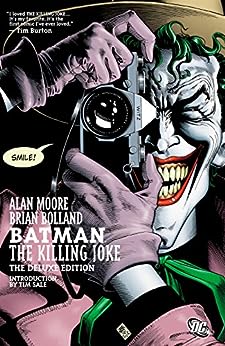 Presented for the first time with stark, stunning new coloring by Brian Bolland, BATMAN: THE KILLING JOKE is Alan Moore's unforgettable meditation on the razor-thin line between sanity and insanity, heroism and villainy, comedy and tragedy.

According to the grinning engine of madness and mayhem known as the Joker, that's all that separates the sane from the psychotic. Freed once again from the confines of Arkham Asylum, he's out to prove his deranged point. And he's going to use Gotham City's top cop, Commissioner Jim Gordon, and the Commissioner's brilliant and beautiful daughter Barbara to do it.
続きを読む
Previous page
Next page
この本はファイルサイズが大きいため、ダウンロードに時間がかかる場合があります。Kindle端末では、この本を3G接続でダウンロードすることができませんので、Wi-Fiネットワークをご利用ください。
このシリーズの次の2話 シリーズの詳細を見る
小計: ￥ 1,881
獲得ポイント: 19 pt (1%)
シリーズをまとめ買い (2話) シリーズの詳細を見る 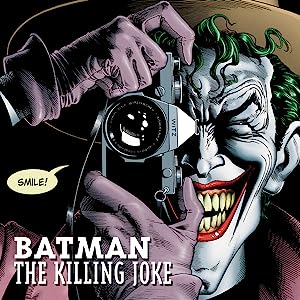 Alan Moore is perhaps the most acclaimed writer in the graphic story medium, having garnered countless awards for works such as Watchmen, V for Vendetta, Swamp Thing and Miracleman. He is also the mastermind behind the America's Best Comics line, through which he has created (along with many talented illustrators) The League of Extraordinary Gentlemen, Promethea, Tom Strong, Tomorrow Stories and Top Ten.

After making his professional debut in 1975, Brian Bolland perfected his clean-line style and meticulous attention to detail on a series of popular strips for the British comics magazine 2000 AD, most notably its signature feature Judge Dredd. He went on to illustrate the 12-issue maxiseries Camelot 3000 and Batman: The Killing Joke for DC before shifting his focus to work almost exclusively on cover illustrations. Since then, he has earned a reputation as one of the best cover artists in the industry, and his elegantly composed and beautifully rendered pieces have graced a host of titles, including Animal Man, Batman, The Flash, The Invisibles, Wonder Woman, and many more. --このテキストは、kindle_edition版に関連付けられています。

The Killing Joke, one of my favorite Batman stories ever, stirred a bit of controversy because the story involves the Joker brutally, pointlessly shooting Commissioner Gordon's daughter in the spine. This is a no-holds-barred take on a truly insane criminal mind, masterfully written by British comics writer Alan Moore. The art by Brian Bolland is so appealing that his depiction of the Joker became a standard and was imitated by many artists to follow.
--このテキストは、kindle_edition版に関連付けられています。

"Easily the greatest Joker story ever told, BATMAN: THE KILLING JOKE is also one of Alan Moore's finest works. If you've read it before, go back and read it again. You owe it to yourself."—IGN

MRC
5つ星のうち4.0 I enjoyed it.... I think.
2020年1月5日に英国でレビュー済み
Amazonで購入
I’m not an avid comic book reader. In fact I’ve only read one or two graphic novels in my life. However, after watching Todd Philip's, Joker, and hearing how it was heavily influenced by The Killing joke, my interest was peaked.
So, needless to say, though I’m a fan of the comic book genre, I’m not familiar with the typical structures and devices of a graphic novel and I have to say I did find it a bit odd.
Before getting to that though I should say I was grabbed by the story. It is an interesting, daring take on the origins of Batman’s arch nemesis, The Joker. The novel downplays the maniacal, blood-thirsty villain I’ve seen the Joker portrayed as before, and instead shows how any average joe could become a crazed psychopath after just one bad day.
To humanise one of the most caricatured of characters was a brave decision that was deftly achieved.
Avoiding spoilers, it is difficult to discuss my feelings on how the story plays out. But it does leave plenty of room for interpretation and thought. This is not necessarily a bad thing. Indeed, for many, it is exactly why The Killing Joke is such a classic work.
But as I mentioned earlier, I was slightly put off by how the story was told. The drawings and colours were fantastic and wonderful to drink in. But I do feel a lot of weight is put on the reader to decipher the writers intentions. Again, I don’t want to spoil anything for future readers but the graphic novel could have done with a bit more elaboration on certain scenes and points (and I’m not just referring to the ending).
Whereas a regular novel is often cut and shortened dramatically in a cinematic reworking, in order to hold the viewers attentions, it is clear that the opposite would have the be the case for a graphic novel like this, otherwise you would end up with a very short film indeed.
I should stress this is not a criticism as such, although it did cause some dismay on my part. As I said though, I’m not familiar with how graphic novels normal tell their tale and this may be the usual structure.
続きを読む
8人のお客様がこれが役に立ったと考えています
違反を報告する
レビュー を日本語に翻訳する

Paul Dolan
5つ星のうち5.0 Does Batman get the last laugh?
2019年1月9日に英国でレビュー済み
Amazonで購入
By far and away my favorite Gotham/Batman story and easily in my top 3 graphic novels (that I own, approx. 20). I just love this book, the story, the artwork, the characters. I guess in my opinion it's a one shot, it has no ties directly with any other Batman/Joker story although it has been referenced in other Batman stories since.

It's a pretty short graphic novel, probably one of the shortest out there, but the story is so well written and the characters so well formed it doesn't need to be any longer.

Not to spoil it for anyone, but the final few panels in the book are so well composed, there is little dialog in them, but the imagery of these panels paints such a powerful story. To a point that you can come to your own conclusion as to what the fate of Joker is in the end....
[SPOILER: Did Batman kill him?]
Enjoy
続きを読む
8人のお客様がこれが役に立ったと考えています
違反を報告する
レビュー を日本語に翻訳する

Amazon Reviewer
5つ星のうち5.0 Masterpiece great job of developing the Joker character with a great origin story.
2017年7月26日に英国でレビュー済み
Amazonで購入
Absolute masterpiece by the legendary Alan Moore. This is a must for any DC fan, a legendary comic which reveals the origins of the twisted and wicked Joker. Showing how evil his sense of humor is and the lengths he is willing to go to achieve his aim of trying to turn detective Gordon crazy, attempting to prove to Batman that all it only takes one bad day to make you go crazy. Which is the best part about this comic, it adds a background to the Joker and humanizes his character like never before, giving you a much clearer insight of who he is and why he does what he does.
Also there is a fantastic artwork in a very unique style, which shows of perfectly the grim and twisted world it takes place in.
Much better then its movie counterpart, a little on the short side however.
Overall it's highly recommended, a compact but memorable comic.
続きを読む
6人のお客様がこれが役に立ったと考えています
違反を報告する
レビュー を日本語に翻訳する

N
5つ星のうち5.0 Something deep and unexpected
2013年10月29日に英国でレビュー済み
Amazonで購入
Before this I had red the Batman: The Greatest Stories Ever Told collection of short batman stories and so as I wanted to read more, this was the first thing I found from the net. And I was totally surprised. You can read reviews of the comic story itself elsewhere but I'll give you a little opinion: The art is aboslutely amazing, very detailed, considered and vibrant, Joker looks just totally sickening and some frames just make your heart stop for . And the story might be one of the best and deepest stories I have ever heard. It's simple but really toughtful as the story explains the motives of joker. Is he trying to prove that the humanity is a hopeless, sickening joke just to get attention and help, or is he gone totally insane, or something else? It's all about characters and their psychologies; what would you do after somebody you really cared about was suddenly taken away from you? How would you survive? In this way Batman's and Joker's characters mirror each other and make you think about the real people who try to prove that their lives are sad and worthless because the world is evil and incurable. In the ending of the Killing Joke there's one frame where Joker's shell starts to brake and for a second this evil character transforms into something sad, or even sympathetic. And it ends with Joker telling a joke that perfectly captures the relationship between batman and joker. And Batman understands.

The introduction by Tim Sale and the afterword by Brian Bolland are written with sincerity and are totally worth a read. It also includes a morally questionable short story (8 pages) written and drawn by Brian Bolland that is surprisingly good and effective short story, even though it's pretty shocking and off-putting (even more than the actual Killing Joke story) as a boy implies that he would be ready to tie up a little girl and do perverted things to her just to ruin the lives of her family. But it's still a pretty neat extra. The book also includes a double page with some sketches for the Killing Joke as well as for the extra short story and every picture includes a caption from the artist himself. It's good as long as it lasts: I would have liked to see even more character concepts and sketches, but I'm glad that they included some of them anyway.

The overall design of the book is black and beautiful, the iconic art on the dust jacket (which you'll really get only after reading the book)and the black-and-purple hard cover art are just as good as it gets. I think this might be the best comic I'll ever encounter. Or maybe that's going to be Watchmen after I get my hand on that.
続きを読む
4人のお客様がこれが役に立ったと考えています
違反を報告する
レビュー を日本語に翻訳する

Paul Hough
5つ星のうち5.0 Killing Joke - Reissue
2010年1月9日に英国でレビュー済み
Amazonで購入
I bought the original paperback of this classic back in the early 80's and recently decided to buy another for my daughter who is in to Batman. This version of Joker's beginnings has become a classic to all Batman, Alan Moore and Brian Bolland fans and this hardback version brings it all back to life. It is virtually the same as the original but the colours have been improved/retouched with an additional writeup by Bolland and an extra story of a would-be Batman assassin. If you already have the original, it's not really worth getting it again unless you are keen on getting all verions to complete your collection. If it's not something you've read before then I can highly recommend it as you will be in for a treat, weather it is just for Alan Moore's writing, Brian Bolland's art or just a different look at the Batman's and the Joker's relationship.
続きを読む
1人のお客様がこれが役に立ったと考えています
違反を報告する
レビュー を日本語に翻訳する
すべてのレビューを参照します
問題を報告
この商品には、不適切な内容が含まれていますか?
報告
この商品は、著作権を侵害していると思いますか?
報告
この商品には、品質または書式設定の問題が含まれていますか?
報告